More than 200 young people gathered at the Adelaide Festival Centre on Friday 28 June for the 2019 Poverty Summit, hosted by the SA Commissioner for Children and Young People Helen Connolly, in partnership with UN Youth South Australia.

Open to all South Australian students in years 10 -12, the first-of-its kind Poverty Summit was run entirely by and for young people, positioning young South Aussies as global leaders in developing real-world solutions to poverty, applying a local focus to a global issue.

On the day, more than 200 high school students travelled from all over the state to assemble at the Adelaide Festival Centre and participate in a series of UN Youth lead workshops, listen to a panel of young experts and present their recommendations on issues they identified as being of greatest concern to South Australian children and young people who are experiencing poverty.

Australia’s Youth Representative to the United Nations, Kareem El-Ansary, gave the keynote address sharing his insights on the United Nations 17 Sustainable Development Goals set for 2030 which features as its first goal the elimination of poverty for all children everywhere by 2030. Students representing more than 29 South Australian, public, private and independent schools discussed how to create a world where no child lives in poverty.

Prior to the event, Commissioner for Children and Young People, Helen Connolly, expressed confidence in the “diversity of young people who would be gathering to bring a unique perspective to one of the biggest social issues of our time.”

The event drew on the Commissioner’s findings from her Poverty Survey undertaken from January through to June this year, to which more that 1,000 young people responded. A summary of these findings was presented at the Poverty Summit to provide a context for the workshops and panel discussions throughout the day:

Children and young people told the Commissioner that ‘helping poor kids’ should be one of her top five priorities, with the common theme of ‘leaving no child behind’ developed as a result of this emphasis.

As much of the existing research on poverty focuses on the impact poverty has on children, the Commissioner’s Poverty Project instead aims to learn what children and young people think are the causes of poverty across our communities, and to hear what ideas they have to address these issues, adopting a peer to peer approach. You can hear their recommendations by clicking on the link below:

Charlotte Nesfield, who was one of the Kangaroo Island students who attended, said the Summit was an ‘amazing opportunity’. 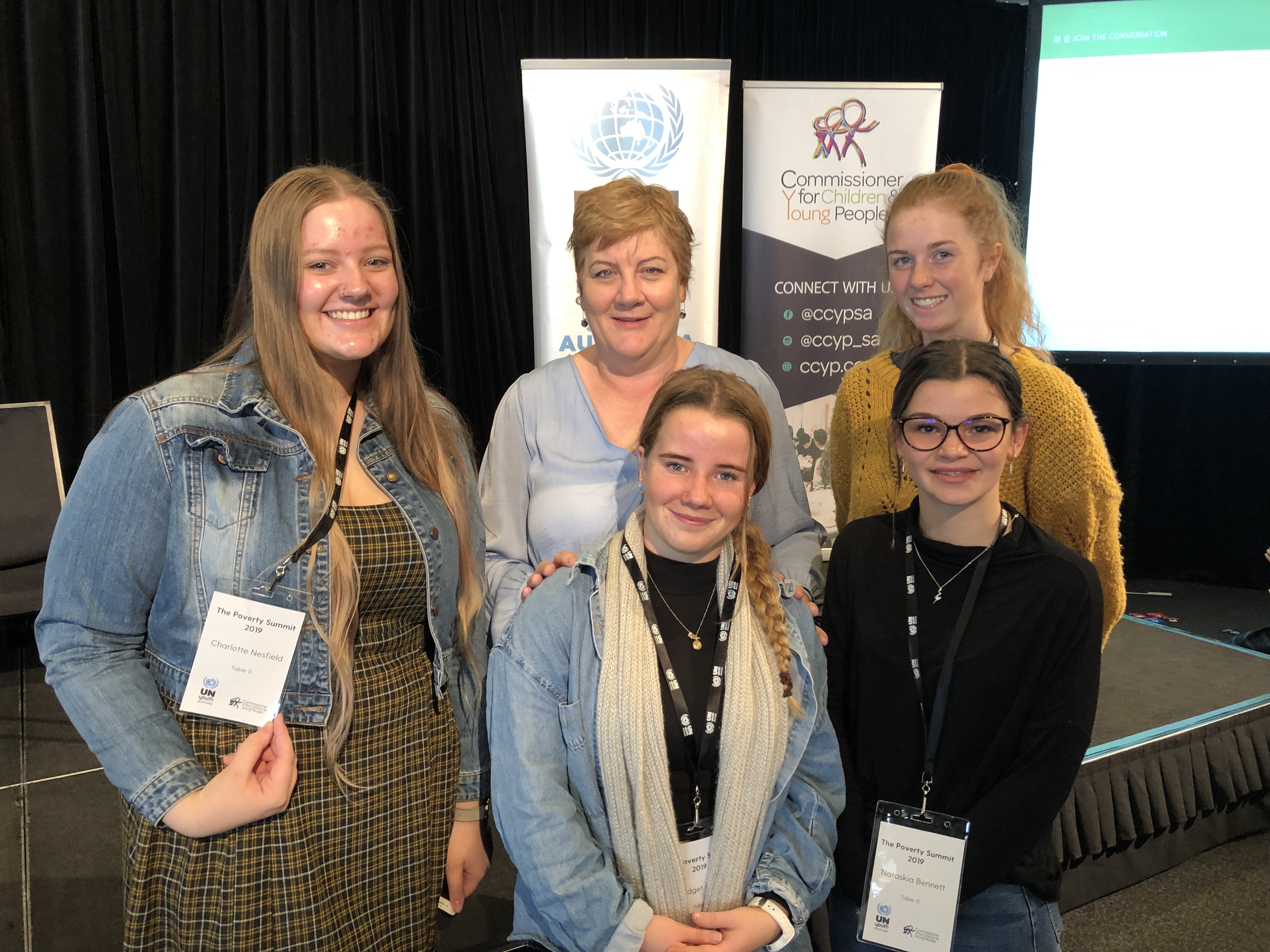 “We learned and discussed important issues with students from around the state that will affect us in the future, it was really amazing that as young people we could have a voice and feel that our opinions mattered.”

The 2019 Poverty Summit built on the Commissioner’s previous consultations by inviting student groups to use interactive problem-solving techniques to come up with solutions to particular issues related to poverty that they had identified through the workshops earlier in the day. These recommendations were guided by the United Nations’ Sustainable Development Goals and considered:

The key issues identified by young people in attendance were homelessness, government policy, healthcare, and safety. The young people talked about wanting cheaper bills to make it easier for families, wanting all children to get a good education and have equal access to activities, both sports and fun things for everyone.

The panel of young leaders shared their insights into what it means to live in poverty and included Kynesha Temple, Imbrahim Ali, Ellen Fraser-Barbour, Doha Khan, Caleb Sweeting and Danielle Seymour. They also reflected on poverty as it related to their own areas of expertise, including Aboriginal rights, mental health, climate justice, diverse backgrounds, multiculturalism and more.

Commissioner Helen Connolly set the framework for the summit in her opening address saying “the inheritance we leave for South Australia’s children and young people depends on the long term investment we make in their future now.”

“Children and young people have already told me how committed they are to a future that leaves no-one behind … I am committed to taking these [recommendations] forward to decision makers for serious consideration.”