Young people in the Australian Youth Climate Coalition (AYCC) in SA have been heavily involved in the Repower Port Augusta campaign since 2012 and have organised numerous road trips, seminars, rallies and painting South Australia with flyers and chalking.  People power played a huge part in delivering the world’s largest solar thermal power plant to South Australia’s mid-north, Premier Jay Weatherill says. The $650 million plant will be built near Port Augusta with lobbying and support from the local community helping to get the project across the line.

“This is an example of people power in action,” the premier told reporters after visiting the proposed site on Tuesday.

“The efforts that this community has made have delivered this project. It gave the company the heart to continue to campaign and to put their resources into this project.

“It gave the social license for this company to operate in this part of the world.”

If you want to hear more about what AYCC SA get up to or want to get involved with them, follow these links: 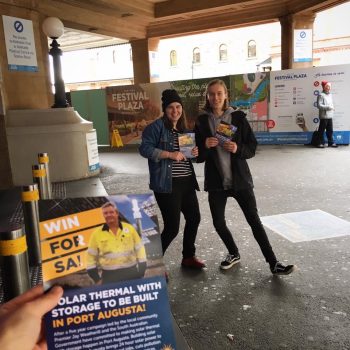 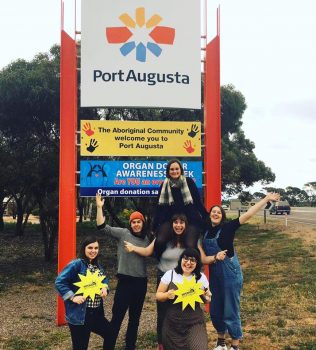 It may be a cloudy day, but our SA volunteers are feeling pretty sunny on a road trip to celebrate the huge solar thermal win announced yesterday. HUGE congrats to the Pt Augusta community and everyone who has worked so hard on this – the biggest solar thermal plant in the world is coming to Pt Augusta and it wouldn’t be happening without your passion and drive. ?✊? #solar4ptaugusta #repowredptaugusta #peoplepower